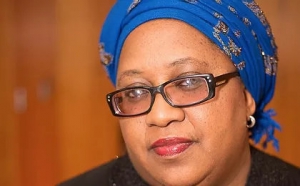 Mildred Okwo is a respected Nigerian film Director and Producer whose films have been nominated and won several prestigious African awards including but not limited to AMVCAs, AMAA, NMA, and “Publix du Prix” at Nollywood Paris.

In 2007 Okwo went back to Nigeria to join the Nigerian film industry. After studying the terrain, she released the political satire titled “The Meeting” which was one of the top box-offices draws of 2012 and set a quality standard for Nigerian made films in the country.  “A film critic described The Meeting as an embodiment of the things we hope Nollywood will one day attain in all her movies”.

In 2016, Okwo was named one of “50 Women Shaping Africa” by influential international women’s magazine Elle Magazine and 100 Most influential people in Nigeria by Y’Naija.com. She is a founding member of the Nigerian Oscar Selection committee and was recently featured in a BBC documentary about female Film Directors in Nigeria.

Okwo is currently finishing up her 4th feature film “La Femme Anjola” which she describes as a classic noir tale with a distinct contemporary African twist. The film is set in Lagos and Cape town and stars Rita Dominic, Mumbi Maina and Nonso Bassey.